Four years ago, I promised Ed that to be true to him in good times and in bad, in sickness and in health, to love and honor him all the days of my life.

We've had some good times this year, but it's also been busy.

Last September I started teaching part-time at Rockwell Charter High School, teaching 11th grade English and a junior-high-level film & lit class. There was a steep learning curve: Not only was it my first year teaching at the secondary level, but I was dropped into the academic year a month or so after it had already started. The new job effectively doubled my income, which eased things financially, and I had enough experience teaching at SLCC that it wasn't a strain there. Because of low enrollment, though, I won't be returning next year.

In December, Ed and I celebrated his 40th birthday and Christmas by traveling to Rome and Vatican City. We had a wonderful 2 1/2 weeks, even if I'm still bad at selfies. (I blogged about our trip and took a lot of photos.)

At 7:02 p.m. on Friday, April 10th, Justin and Cheng had their first child, a very much wanted and welcomed baby boy: Niall Thomas, who weighed in at 7 pounds, 4.8 ounces.

The one graduate class I had during the spring semester - an Autobiographical Literacies seminar - was a relaxed seven-week class that started in late October. My last class for the graduate degree was a ten-week capstone research project, taken during the Fall 2015 semester. And last weekend, this happened:

Tonight I'll make us a nice dinner at home - steaks and shrimp; we have dinner reservations at Log Haven on Saturday. I sent Ed some white chocolate-covered strawberries at work vis-à-vis Edible Arrangements, and he was nice enough to even bring some home so I could have some. 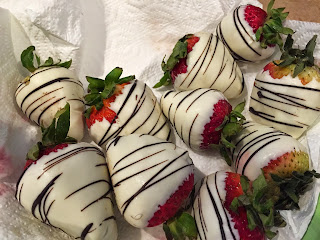 I had also ordered us an anniversary cake from Salt Cake City, one that was reminiscent of our wedding cake (which we finally finished off last year).

Posted by Michelle Szetela at 2:00 PM