Today was a quiet day; I find that I haven't much to say about anything. I'm feeling tired, in need of a mental health day. That's not going to happen for another couple weeks. Things will be fine - it's another month until the end of my college semesters, at which point I'll have a break until mid-January, at which point things will become very busy again for another couple months. I'm trying very hard not to think about this, because I'll get myself very anxious about the spring semester. I'll probably blog more about that later, but right now I'm taking the mindset that I can't do anything about it, so I can't worry about it, since at the moment I can't control what will happen.

Today I took a mental break when I got home from school, though. I made my way through Maeve Binchy's Evening Class, which I've read before, but which is light and readable. (On my Kindle, I keep copies of various books I've read before but which I've enjoyed enough to keep, books that are good for travel or that don't require heavy concentration.)

This weekend I'll have to read about 50 rough drafts, grade a handful of revisions, skim through A Wolf at the Table (which I'd read over the summer, in preparation for my Autobiographical Literacies class), and write a journal entry for the class.

In any case, I find that I have nothing of especial substance to blog about today, but in my internet exploration tonight, I came across this, what's thought to be the first photograph of a human being, taken in Paris in 1838 by Louis Daguerre, the French photographer who pioneered the daguerreotype. 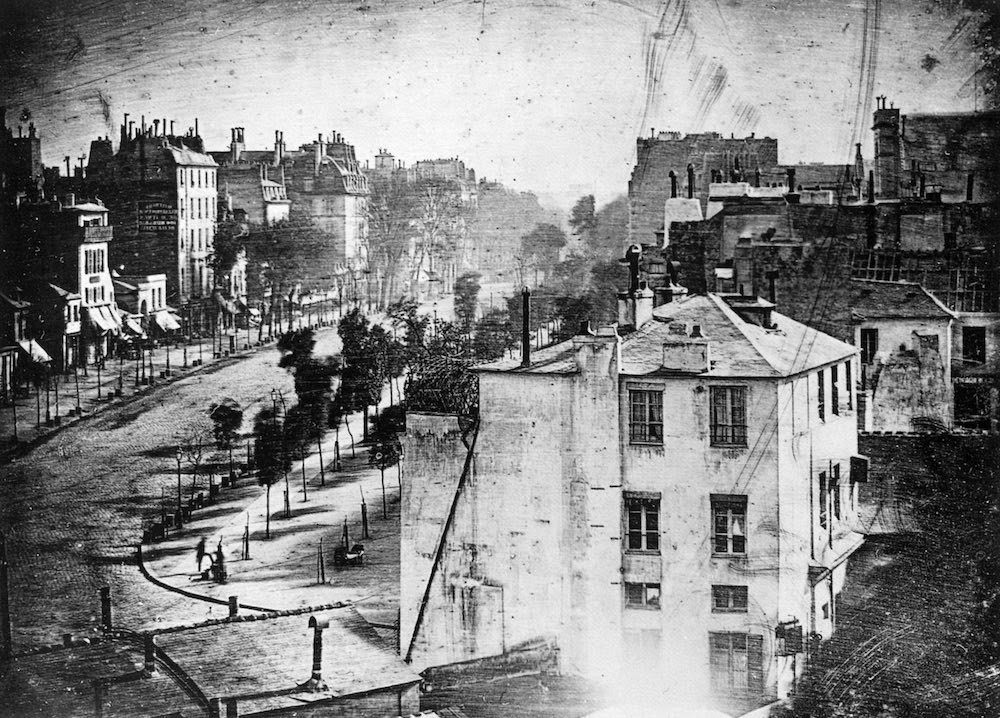 The exposure time for the image was around seven minutes, and although the street would have been busy with traffic and pedestrians, it appears deserted. Everything moving was too fast to register on the plate.

The exception is the man at the lower-left who sat still long enough to appear in the photograph. The person cleaning his boots is also visible, although not as distinctly.

Posted by Michelle Szetela at 8:38 PM