NaBloPoMo: If This Wall Could Talk, Part 2

I include here the creative non-fiction piece I wrote several years ago for a graduate class in creative nonfiction. It's not especially long - a little over seven pages - but I divided this into two blog posts so as not to overwhelm. (Here's part one. A pdf can be downloaded here.)

I remember driving through Checkpoint Charlie. I was in the back seat of the car; and as we approached and drove past the little shack, mildly curious, I remember thinking how dingy and grey it was. I was unaware of the process of crossing between West and East Berlin – if there was a process at all. 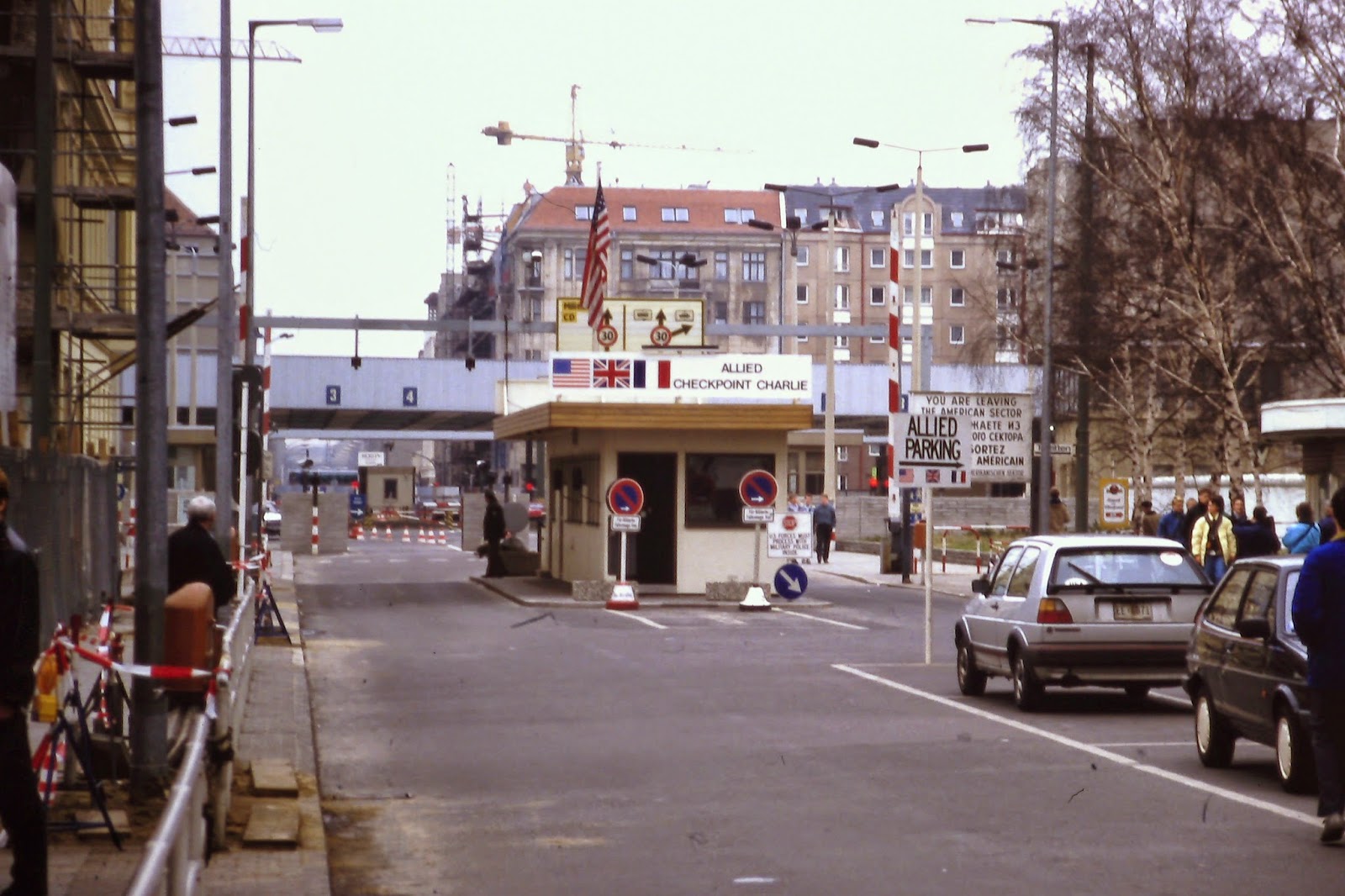 Checkpoint Charlie was created for the purposes of registering and briefing “Allied Personnel” and foreign tourists – it was off limits to Germans – and of the eight crossings between East and West Berlin, this one crossing was the single crossing point for foreigners or members of the Allied forces, and the place where foreign travelers could get rules about East Berlin. I don’t know if there were special rules or information we had to provide in order to pass through the checkpoint; a nagging piece of something tells me there were, but I don’t know if that’s a false memory, or if it just seemed to me at the time that we should have had to provide extra or specific information. And so we passed, stealthily snapping a picture before we drove through: There was a sense of palpable caution in East Berlin. I remember wanting to be careful, but of what, I don’t know. I remember feeling a sense of being watched. One had to be careful how one acted, where one went. 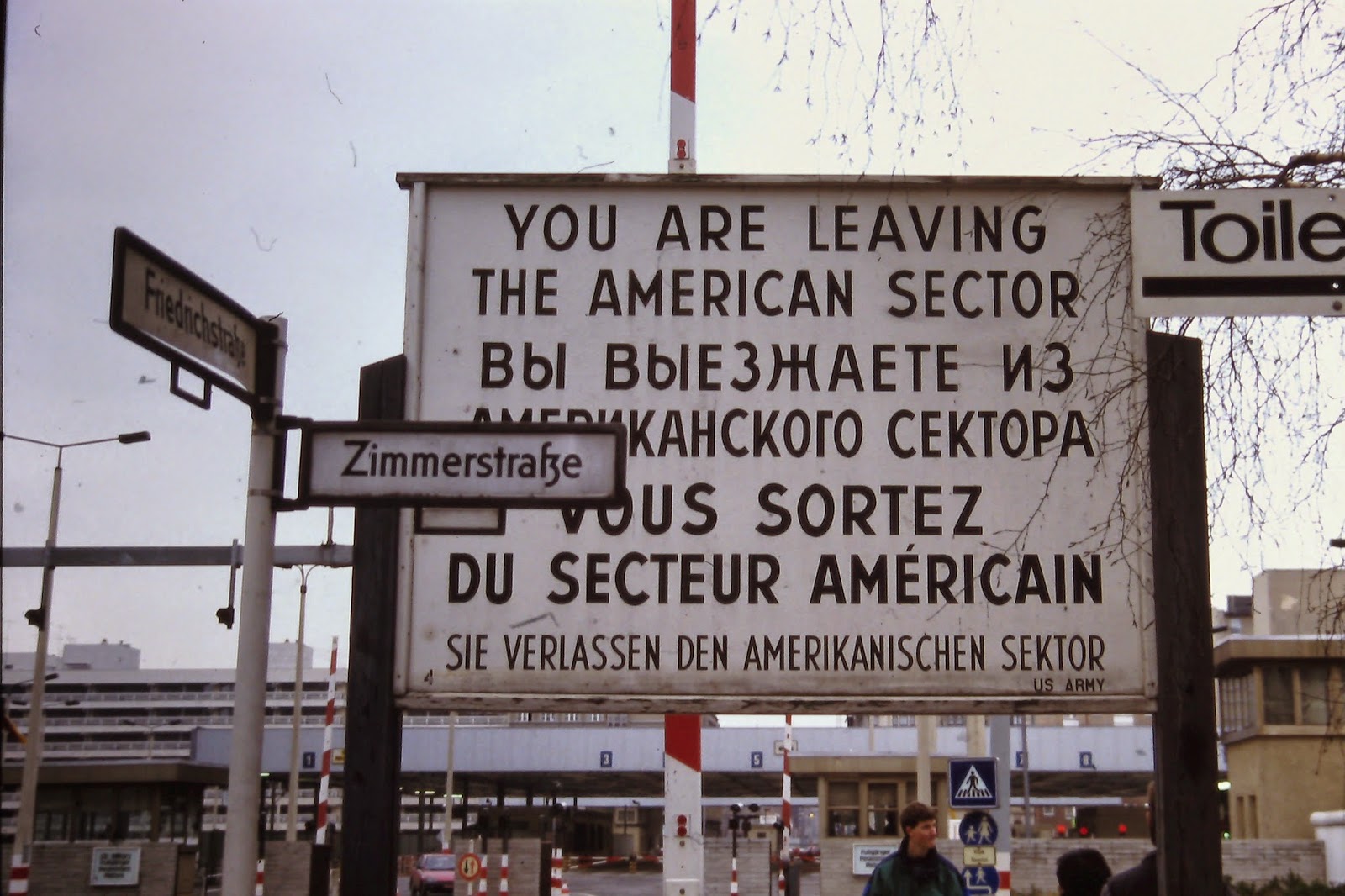 My memory of the dingy grey atmosphere didn’t only apply to the checkpoint itself, but all of East Berlin – it was an overcast, grey day. I remember the weather being overcast and grey, and this was a true memory: Pictures that I’ve seen reinforce that memory. The streets were deserted. Buildings were straight out of what I envisioned was high style in the 1970s: Orange, grey, and brick, or some combination. There were no bright hues, no sense of happiness – just wariness. All this time later, it’s that sense of tiredness and wariness and caution that I remember more than the physical surroundings. My memories of East Berlin consist of driving through Checkpoint Charlie, the weather, the quiet streets, and one building in particular that had a partly orange exterior. I don’t remember leaving.

Voluntarily leaving wasn’t an option for residents of East Berlin, of course. Citizens, and some guards, tried to escape by digging tunnels, hiding in cars, or even climbing or flying over the Wall. In realizing how much I didn’t know about the people who tried to leave, I’ve tried to determine how many people attempted to escape (up to 10,000); how many actually escaped (about 5,000); and how many were killed attempting to escape (between 125 and 246) – there are no exact numbers of people whose escape efforts were either attempted or successful. Clearly there was an element of desperation, and occasionally escapes were quite dramatic. One well-known victim – one of the first – was 18-year-old bricklayer Peter Fechter, whose plan had been to hide in a workshop near the wall, jump out of a window into a strip between the main wall and the inner German border, and climb over the Wall near Checkpoint Charlie. Guards shot Fechter just as he reached the Wall and in full view of several hundred witnesses, who were unable to reach him; he received no medical assistance from the East Berlin soldiers. By the time Eastern German officials arrived to take Fechter to the hospital, an hour after his being shot, it was too late. Apparently this was common practice, though: Anyone attempting to escape who was wounded, no matter how close he was to the Western wall, and could not be rescued for fear of fire from the East Berlin border guards; most killed were in this “death zone.” The last killing was on February 6, 1989, but it was still one year and 11 days later, on February 17, 1990, the wall was dismantled at Brandenburg Gate.

Of course, all attempted escapes were why the Wall was built to begin with: To keep people in. Because the economy was better in West Berlin, East German citizens traveled to West Berlin to take advantage of the better economy; all the emigration from one side to the other affected the East Germany economy. Furthermore, because West Berlin “belonged” to the Allies, the Soviets feared East Berliners would travel to the west and change their way of thinking, join the Allies, and become convinced that capitalism was preferable. The previously opened border was closed in May 1952 by the East German government because of the number of skilled workers who were leaving for West Berlin and the rest of West Germany, and although East Germans were still permitted to travel to West Berlin, it became more difficult and dangerous to travel to West Germany. Between 1949 and 1961, more than 2.6 million East Germans had escaped to West Berlin and on to West Germany. Despite having lived through the events leading up to the destruction of the Wall, I knew none of the history, and I was slightly appalled at myself in not having taken the time to learn about the consequences of the building of the Wall. I remained oblivious until I realized that it was an embarrassment that I didn’t know the history of a place I had called “home” for a year. I had appreciated our visit to Dachau more than our trip to Berlin because it was much starker; the Wall hadn’t cracked my consciousness in the same way. All this is history better known to the adults who were more cognizant than I was for not only the year I lived abroad, but for a few decades afterwards. It’s surprising, in retrospect, how little I understood, and how long I waited to learn about. This isn’t the distant past; high school seniors and college freshmen would have been born at the time the Berlin Wall came down.

I don’t remember exactly when we left Germany and moved back to Pennsylvania; it was sometime in May or June 1988, still a few years before the Wall fell. The Berlin Wall remained a facet of history that I had touched and gone through and even broken pieces of in my own hand. My year in Germany had made me angry at the injustice of being taken out of the United States – an unforgivable offense indeed. Logically I wasn’t able to analyze why I remained irritated, and even though I tried to talk to my parents about my experience and why I was so frustrated at having lived in Germany, I wasn’t given the understanding I felt I needed. It was a hard thing for me at the time, adjusting to such a drastically new life in which everything was different. But now, as an adult, I can appreciate having lived through a small piece of graffitied history.
Posted by Michelle Szetela at 10:00 AM