NaBloPoMo: If This Wall Could Talk, Part 1

It was covered in graffiti, all of it very colorful, some rather artistic. Most of the graffiti consisted of patterns, but some was words I didn’t bother to try to translate. And most of the wall was covered in bright colors. I suppose it would have been possible to investigate all 103 miles of it, but I didn’t consider any part except the segments that didn’t fade off into the distance to my right and to my left. For some reason that I didn’t quite understand, I wasn’t allowed in to the other part of the city – at least, I understood that it wasn’t easy to get in. This was all very mysterious; the wall hid a whole part of the city that I wasn’t allowed to explore. I wanted to know what was behind it: I didn’t like being kept out. I liked staring at the huge colorful face of the Berlin Wall.

What was over there? My ignorance in this one matter could have summed up my entire year in Germany. I didn’t know what was going on; a wall blocked my vision and my ability to understand just how history can affect and divide a country, and even go beyond that.

I didn’t know until I was an adult that it wasn’t even the original wall that I was seeing for the first time; there had been three versions of the Berlin Wall built previously. In August 1961 a basic wire fence was built – incidentally, in the middle of the night; by the time the residents of Berlin awoke on Sunday, August 13, most of the work had been done. A second wall, which stood between 1961 and 1965, was built to prevent the residents of East Berlin from escaping. Wire wasn’t scary enough, or enough of a deterrent, or forbidding enough, because a concrete wall was built in ‘65 – and stayed upright until ‘75, at which point the construction began for the Grenzmauer 75 (the Border Wall ’75), which stood until 1989. And this was one scary wall, too. It was built from 45,000 separate sections of reinforced concrete. A smooth pipe lined the top of the Wall, and was reinforced by mesh fencing, signal fencing, anti-vehicle trenches, barbed wire, 259 dog runs, 20 bunkers, and 302 watchtowers. The Germans did nothing if not thoroughly. This Wall was meant to keep people separated. I was born a year after the construction began on the Grenzmauer 75, and first saw the wall in 1987 – I was 11. I knew nothing of any Wall, knew no statistics, had no mental image, before I actually saw it. Just like my entire year in Germany, I had no expectations, knew not what to expect, before I actually experienced life there firsthand. I had no real interest in German history, either, nor do I remember asking any questions.

It never really sank into my pre-teen consciousness that we were moving.

I was extremely quiet as a child, and so shy I had trouble not studying my shoes when I walked. I didn’t know what was going on, and furthermore, I didn’t know what questions to ask. I’m not sure if I even realized I could ask questions. When we moved back to Pennsylvania, a lot of adults had questions, though. And a few assumptions.

I really hated those assumptions. No, my father was not in the army. Mom wasn’t in the military either, but no one ever asked if we were living in Germany because of Mom’s military career. To add to the confusion, neither of my parents is ethnically German, and no one in our extended family lived in Germany. Why would you move somewhere if you weren’t in the military and had no ties there?

We moved for reasons that didn’t seem to occur to anyone to ask about: My mother was (and still is) a German teacher. Having taught German for years, she decided it was time she give herself a professional challenge. She applied for and won a scholarship from the Fulbright Program, a program of grants designed for international educational and cultural exchange, which, according to their mission statement, “aims to increase mutual understanding between the people of the United States and other countries, through the exchange of persons, knowledge, and skills.” As part of such an exchange, my mother would teach English at a Gymnasium (a school that prepares students for university study and leads to a degree called the Abitur) in the southwestern German state of Baden-Wurttemberg; an English teacher from that same school would teach German at the Catholic high school at which my mother taught at the time.

I had finished elementary school and discovered that we might be going to Germany for a year because of this thing called a Fulbright Scholarship. I had vague notions of what a “scholarship” was, and had never heard of this “Fulbright” thing-slash-person, so explaining the reason for our yearlong stay was shaky. I knew no German; was given no German-language instruction; was not really prepared in any way for moving to Germany. My brother and I would be attending the same school at which my mother taught, while my father, a math teacher, arranged to take a sabbatical. Since I had just completed 5th grade, I had not yet had any foreign language instruction in school, although my older brother had taken some French; my future classmates themselves had already taken a year of English, which was helpful but which caused some confusion when they realized there were differences between American English and British English. (I remember sitting in the courtyard on the first day of school, my face in my hands and staring down at my feet; a group of classmates approached me and asked if I was British. Most students had known an American family was coming, so I’m not sure if this was an icebreaker or if they couldn’t differentiate between American and British accents, but at least it was an “in.”) Our conversations were a combination of interesting and unintelligible, at least until their English improved and my German existed.

At least my mother’s presence as a teacher made the transition smoother than it could have been, although from my standpoint, her presence was the only benefit of my schooling. Back in my small home town in Pennsylvania I didn’t have many friends, but it was the only home I could remember (we had lived in the same house since I was two); I was extraordinarily shy, afraid of meeting new people and found it easier to stare at the sidewalk when I walked instead of other people. Years after our having moved, I don’t remember the details of that move; I remember the emotions behind it. Perhaps I was just easily bewildered, but I didn’t know which end was up for a few months.

I don’t know how normal it is for a child to be fairly clueless of her new surroundings, but clueless I was – in spades. Not knowing what to expect from school and being unable to navigate that geography was a microcosm of not knowing what to expect of an entirely new country. We drove a lot that year, giving me a crash course in geography; driving to Italy, Luxembourg, France, Austria, Switzerland, and through England to Ireland, was so easy – although admittedly, I have few solid memories of those trips. I had developed the talent of falling asleep in the back seat even before we left town, but my age and lack of global knowledge kept me from grasping the significance or attaching any meaning to the various places we went. I did realize how compact this continent was, but I was not great for asking questions yet; I didn’t know what to ask.

Our 400+ drive to Berlin was no different. I wish I remembered details of what the trip was like, if we stopped off along the way to do any sightseeing, or even how long we were in Berlin. I have only some recollections of Berlin, but I do have a few. One is of my brother posing in front of the Berlin Wall. He’s all of 16, and posing like the stud he thought he was. Standing in front of an extremely colorful backdrop of the heavily graffitied Berlin Wall, he’s completely surrounded by color, although large segments weren’t covered in graffiti at all, and some parts had random streaks. 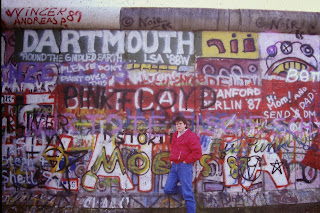 In many sections, the Wall just looked like a normal, very high, stone wall that would divide a construction site or be decorative around an estate. I remember how colorful the Wall was.

Continue on to part two.
Posted by Michelle Szetela at 9:45 AM