For years now I've had an Amazon Wish List. I mostly use it to remember books to check out at the library (if the library has them), or, a bit more rarely, to bookmark things I'd like but can't really afford or justify buying right away. Sometimes I get something sent to me from my wish list - Justin and Cheng sent Ed and me some really beautiful knives, which I did have on my wish list - but I can't remember the last time someone has sent me a book from my wish list, which bums me out (probably too strong a phrase) because I don't really want or need things: I want to read, and between teaching and taking classes, I rarely get to read for fun as much as I'd like. I guess people think that they should send something more expensive, but it's the books that take me happy.

For Christmas this year, though, among other things I got an Amazon gift card from my parents, so I went ahead and ordered several books which I probably won't get a chance to read until summer. Many of them were used, because I'm cheap that way; I don't generally care if they're not "new," although I do prefer the most recent editions.
Not bought using my gift card because I'm an idiot and had temporarily forgotten about it led me to outright buy these books:

Posted by Michelle Szetela at 5:23 PM No comments:


We went to a Christmas concert at the Cathedral of the Madeleine, in which the choristers from the  Madeleine Choir School performed Britten's "A Ceremony of Carols":

listen to ‘Excerpts from Britten's "The Ceremony of Carols"’ on Audioboo


We saw the Dead Sea Scrolls exhibit at the Leonardo, and the Christmas lights in Temple Square. 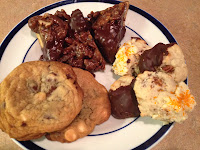 
I prepared apple cinnamon steel-cut oatmeal in the crockpot for breakfast this morning; the Christmas goose is cooking away, and soon so will the sausage stuffing, oven-roasted cauliflower, and buttermilk biscuits be in the oven as well.
Posted by Michelle Szetela at 3:10 PM No comments:

One class just did not like me. Well, two students in the same class didn't like me. Thankfully no curse words were used, but clearly they didn't think I had much to offer. It didn't surprise me; this came from the afternoon class at the main campus, a class I had trouble with, and this was reflected in the grades of at least half of them. I had many students who simply stopped showing up, and at least one student regularly groused at me for not giving her information she hadn't shown up in class to get (or, for that matter, could have gotten on the course website). She didn't do well because she didn't bother to familiarize herself with the assignments, and then questioned why she didn't do well. The mental connection just wasn't there.

Perhaps one does treat different section differently; it's certainly not done intentionally, and I really can't grok how I treated these particular students any differently than the students in my other classes. One or two accusations of a bad attitude from one section since January 2012 isn't something I'm worried about; I'm just curious as to what I may have said that would have been interpreted the way it was.

The problem with course evals comes down to things like, "the professor offered no feedback," which conflicts with more students who said I did provide feedback (sometimes "good feedback"). It's like a love language in that I'm trying to figure out a way of giving students feedback, or the correct amount of feedback, or presented in such a way that the student understands that it's feedback, and provided in such a way that each student can "hear" this feedback.

I still remember one student, a few semesters ago, complaining during the last week of the semester that I didn't answer any of her questions. This student did not once raise her hand, send an e-mail, or speak to me before, during, or after class; I asked her if she had asked me a question using any of those methods that I hadn't responded to, and she just shrugged. But some students still don't see the connection between speaking up and getting their questions answered, or they don't quite know how to complain in such a way that isn't a personal attack.
Posted by Michelle Szetela at 12:12 PM No comments:

Our home study is finally done; it's taken nearly four months (possibly longer) to complete this task, mostly because of the lag between acquiring and submitting paperwork. We were told that "most" couples were able to submit their application within about two weeks, and that "most" couples had their home study completed in about another two weeks.

There's an unspoken presumption there, though, that most people have grown up and continue to live in the same area in which they currently live; therefore, acquiring the necessary paperwork takes a relatively short amount of time. Since this applies to neither Ed nor myself, though, this took months of assembling paperwork from different states that don't share a border with Utah; it took Ed close to two months to be seen by his primary care physician for a checkup (because if one works a traditional 9-5 job, it's somewhat difficult to get an appointment for a non-emergency). Some of the paperwork also wasn't acceptable: We had been told to submit letters from our employers, verifying employment, but the automated option that SkyWest provides turned out to not be acceptable, so Ed had to get his supervisor to write a letter, which took a couple days.

Then we had to get another of our doctor's to write a letter stating he had no concerns about our ability to parent, which led to some issues: The letter had to be notarized; the doctor refused to notarize it; he didn't have the capability to type it, so he hand wrote a letter; he was given another option to notarize the letter, which would have required him to fax the letter and a copy of his ID, which he refused to do (and, actually, one is legally required to get something notarized in person). I had multiple conversations with this doctor, who cursed me out for making this request before hanging up on me. (Twice.)

Scheduling the home study itself took a couple weeks; it could only be done during the week and during the day, which meant we had to figure out when Ed could take a day off work for what we were told might be a three-hour home study. (The social worker mistook the time and showed up an hour early; fortunately, the home study only took two hours, so we were pretty much done by lunchtime.)

Finally - or almost finally - it took about six weeks for all of our references to be received; the last one was sent multiple times by local friends, but even the friends having mailed a copy of the reference twice and faxing it once didn't get it there, so she had to physically drive it there. I'm not sure they would have even acknowledged its receipt had I not been on top of it.

We also had to take three online parenting classes and submit certificates of completion. This wasn't as helpful as I had hoped - all the material covered was information I had (ironically) learned in an adolescent psychology class I had taken as an undergraduate as part of my teacher training, and the information not covered by that psych class were things I picked up as a teacher. We were taught, for example, not to punish our child, that we should discipline our child. (One example of "punishing" included a parent taking off his belt, theoretically to beat the child.) We were also forwarded information on additional materials to read, including websites that discussed the reasons for not spanking one's child.

And finally about two weeks ago - the Monday before Thanksgiving - we had an interview with the adoption coordinator and an assistant, who questioned us first separately, and then together, after which we were told that the director would have to sign off on our home study, which she would be able to do the following Monday (since she was out of the office that week), but that they didn't see any reason why our home study wouldn't be approved. At this point, we're waiting for the official approval before we can be marketed to potential birth parents.

We've been working on our adoption profile as well; a booklet has been assembled by the adoption agency with whom we're working (we're working with a different agency than the folks who did our home study), but our home study has to be approved before we can be marketed online. We sent pretty much every single picture we had of the two of us together and individually (even pictures of ourselves growing up), but we were really scraping the bottom of the barrel; we kept being asked for more pictures that we simply didn't have.

One of the most frustrating presumptions of this process - aside from the sheer invasiveness of it - is the presumption that the reason that we're adopting is because of infertility. This does seem to be a primary reason for adoption, and it's something people understand (that or being unmarried and wanting a child). However, no one knows quite what to do with you if you don't know your fertility status  because you haven't exhausted that avenue first. We don't know our fertility status; it's not something we want to pursue: Had we met and married 10 years before we did, perhaps that's something we would have explored. (It's not like we dated for 10 years before getting married; you meet "the person" when you meet him or her, after all.) IVF is an expensive process, and emotionally exhausting, from what I gather.

Adoption itself is expensive enough itself, and we figured we could either go the IVF route and spend the time and money for something that may not even be an issue, or we could choose adoption, which seemed a more sensible choice. We wouldn't have been able to financially do both. The "How do you feel about your infertility?" question that we've gotten, and which I've answered effectively as, "What infertility problem?" has been met with looks of surprise. "We don't know that there's a problem. Things haven't worked out so far in the pregnancy department, so we've decided to pursue adoption" is the answer I give, "Why not try IVF first?" "Because we're in our late 30s, there's a very low chance it would work anyway because of my age, and we didn't want to spend a lot of money and emotional energy on something that isn't likely to work. Plus, we're Catholic, and Catholic teaching is pretty clear on that." (The religious answer is one that's more easily understood, too, even though I'm not sure how much I agree with Catholic teaching on that one.)

Our home study has been officially approved, and I'm waiting for a copy that the agency had agreed to mail me (and which I should have in a few days) - we're just glad this part of the process is done.
Posted by Michelle Szetela at 11:24 AM No comments: