Yesterday was my birthday; I've officially entered my late 30s. Ed and I had a really great day yesterday, despite the snow that wrought some minor havoc on the roads, making driving (and walking) occasionally tenuous. Ed had a few surprises in store for me, including taking me for lunch downtown to Siegfried's Deli, a German restaurant and store that served muy authentico German food.

We may have raided the store after we were done with lunch. (I do not believe it is possible to have bought too many Wuerste or chocolates with marzipan.)

After lunch, Ed took me to the Mummies of the World Exhibition, which was being held at the Leonardo. I'd had my eye on this exhibit many moons ago, but I'd kinda forgotten about it the meantime. The place was mobbed, and we were glad Ed had bought tickets ahead of time (it was a timed entrance, and the place was full of families).

It was absolutely fascinating: There were the obligatory Egyptian mummies, but there was also mummies from Asia, Oceania, South America, and Europe, and both human (fetuses, children, and adults) and animal mummies, some of which were comparably recent, many of which were preserved naturally and accidentally in a variety of environments. There were also quite a few interactive displays that demonstrated and explained the various techniques used to learn more about the individual mummies, and shared what was already known. It was mildly disconcerting to come across "new" (300-year-old) mummies whose names, birth dates, and dates of death were known - although some of these recently mummified people we knew nothing about aside from their names. Of course the ancient mummies less is known; sometimes, in the case of young children, not even their gender could be determined. Mummification techniques were explained, as was the materials, linens, and clothing; the positions and locations in which the mummies were buried and found were explained. Really quite the exhibit.

We had planned to go out to dinner last night, but the snow had started up again and we weren't quite up for dealing with slippery roads, so we ordered pizza and decided to go out tonight instead, so off to Joe's Crab Shack we went, and had a wonderfully fishy dinner.

Last night, though, I did get to open my presents: Aside from a vintage 1981 Strawberry Shortcake lunchbox (It's metal! And it comes with a thermos, and an outline of the Thermos imprinted inside the lunchbox! Banged up as all get out, but Ed knows I loved Strawberry Shortcake as a kid.) found on eBay (purveyor of childhood memories), I got a beautiful sterling silver silver and blue art glass pendant and earring set (Etsy is a thing of beauty; I found my wedding veil on Etsy), and a Flip MinoHD. I had a snafu in figuring out how to turn it on, but it's all charged up and waiting for us to go someplace interesting.

My parents, Justin, and Maria all let me know they had presents on the way, but in the meantime Maria had sent me a dozen New York bagels, which arrived earlier this past week, and my parents had sent some flowers, which arrived on Friday: 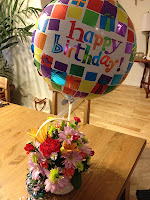 Posted by Michelle Szetela at 9:21 PM No comments:

Even almost two years after my own wedding, I still come across helpful "Do this for your wedding!" lists, or "These things are not necessary!" lists. Both are frustrating, but for different reasons. Really, what it comes down to is that you should do, for your own wedding, what you'd like, because no matter what you do, someone will tell you it's wrong.

This list kinda made me think for a minute, because I know this woman got married in the area where she and her now-husband live. Obviously not everything thinks of everything, and since most people (I think) still get married close to where they live, a lot of this is probably somewhat decent advice, but there are things that didn't get taken into consideration.

What one considers "necessary," others don't, so I really hesitate to outright say that some things just "aren't needed." They may not have been needed for you, but that doesn't apply to everyone.
Posted by Michelle Szetela at 2:31 PM No comments:

A Chicken Farm and a Sheep

The past few months, I've been donating on the first of the month in various ways ChildFund - the first of the month always seemed like a good way to remember to donate - but this month I dropped the ball and forgot until this evening, so I rectified the situation by perusing their Gift Catalog's Farm Animals section (a section I've never donated from before) and found a couple ways to help:
Posted by Michelle Szetela at 7:16 PM No comments: