Around Thanksgiving, Ed and I were made aware of various Christmas markets in the Salt Lake City area being open for a week following Thanksgiving. Today was the last day two of these markets were open, so we thought we'd check them out.

The Old World Christmas Market looked promising, especially since it was being held in the old Salt Lake City Union Pacific Depot, which is just a cool-looking old timey railroad building. I'd never seen anything Union Pacific before I moved to Utah, which I guess speaks to my lack of exposure to this part of the country. 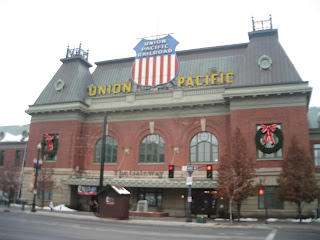 The market itself was a bit of a downer, though. Because today was the last day, perhaps some of those outdoor vendors had already gone home, but there wasn't all that much to see or buy. We thought we'd grab some of the advertised German food for lunch, but aside from a guy outside selling some sausages, and separate vendors selling frybread, hot chocolate, and kettle corn, there wasn't much to be had, so walked a few extra yards and had lunch at Thaifoon instead. I think we spent a total of 10 minutes ascertaining there was nothing interesting to be bought - nothing especially festive, Christmasy, or unusual.

Since the afternoon was still young, we decided to try another Christmas market, the South Jordan Christmas Boutique. It was certainly larger, but it was more like a home show, selling sheets, weight loss products, jewelry, clothing, and the world's biggest collection of ugly purses (sold by multiple vendors). I think I saw one place that sold Christmas ornaments.