Last Sunday was the first Sunday in Advent, which is the beginning of the Catholic liturgical year.  Around the time the first (purple) candle was being lit, it occurred to me that perhaps I should get an Advent wreath for home. I did some shopping on Amazon and found some nice wreaths, but the one I kept coming back to was this one. It was on the expensive side, but it was the nicest one I saw. (Plus, bonus points for the Irish/Celtic factor.) It's inscribed with text that reads, "As I light this flame, I lay myself before thee." It's bronze, and pretty hefty. It finally arrived today: 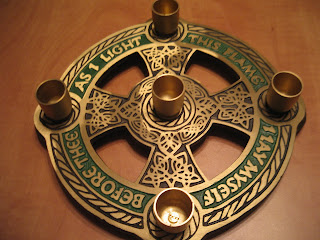 I had also ordered the appropriate candles, which of course arrived several days ago. (That's a beeswax candle in the center). I simply cannot make any of the candles stand upright; they kept listing off to the side, but we lit two of them tonight after dinner (since it's the second weekend in Advent), and kept them lit for a couple hours: 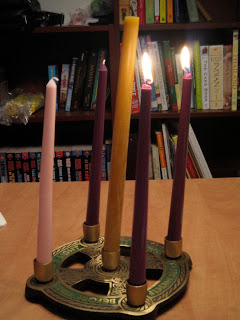 The candles themselves seem to burn pretty quickly, so for the time being I'll only leave them burning for an hour or so every night; perhaps I'll only burn them at the weekend, or perhaps I'll just buy some more candles, if I can find some more inexpensive Advent candles.
Posted by Michelle Szetela at 11:00 PM