In May I'll be marrying someone who has absolutely no musical tone whatsoever. Ed did not have music lessons growing up; and while he has talents and skills I do not possess, he should not sing. Inexplicably, though, he has developed a fondness for the tuba. Last week we were discussing Tuba Christmas and, knowing he would like to go to a concert, on a whim I Googled whether there was a way to ascertain if there were any upcoming local Tuba Christmas concerts.

And indeed, we discovered a tuba Christmas concert planned for this very afternoon. It was held at the Rio Grande Depot, which made me happy because even more than airports, I love old, historic railroad depots. 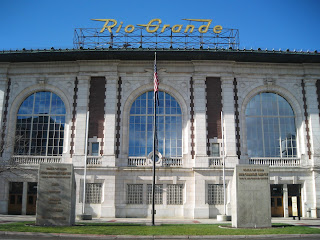 These days the building houses the Utah State Historical Society as well as the smallish Rio Gallery, an art gallery (somewhat inconveniently) open Mondays through Thursdays, but which did have some nice pieces: 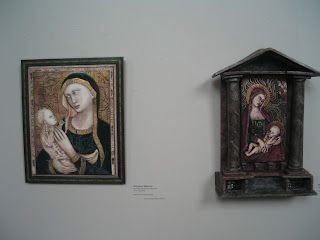 In any case, we hung out while a plethora of tubists played various sizes and types of tubas. I had no idea there were so many different styles and sizes (and even colors) of tubas. Folks played tubas of varying sizes: Some tubas were small; a few were those huge wrap-around-the-tubist types that looked like the tuba was digesting a person. The youngest tubist in the bunch was a 6th grader; the oldest was in his late 70s. A man and his grandson were both playing. And the length of involvement of those playing ranged from those for whom this was their first year to those whom had been playing for more than 20 years in this particular collective. (Apparently, Tuba Christmas has been a Salt Lake City institution since 1983.) It was quite a range of people, and I hesitate to admit how much I enjoyed it for fear of inflaming Ed's obsession. One felt the tuba playing as much as heard it.

Posted by Michelle Szetela at 11:00 PM