Tonight Ed and I went to our first Christmas concert of the season, which featured the Utah Premiere Brass and the Salt Lake Choral Artists (consisting of five separate choirs: the Concert Choir, the Chamber Choir, the Women's Choir, the Salt Lake Vocal Artists, and the Young Choral Artists), who sang both separately and together in various configurations. The Utah Premiere Brass performed sometimes with the choirs, and sometimes alone.
It wasn't the best concert I've ever been to. I'm a choral nerd, and have heard better choral performances, but not all of it was the fault of the performing choirs. I wasn't thrilled with the selection of music, which was performed fine for the most part, but which didn't blow me away. Most of the songs chosen and performed weren't ones I'd heard before; I was hoping for more of the "normal" Christmas songs (although there were a handful of standards, such as "O Little Town of Bethlehem" and "Carol of the Bells").
There was a lot of commotion throughout the performance, which detracted from my ability to really listen to the performances; large segments of the audience kept coming and going, which was disruptive, to say the least. There were also a considerable number of children present, which normally (being a teacher) I don't mind; I like seeing kids being taken out to concerts. However, the sheer number of small children crying, whispering, talking, and wriggling about, including the three in front of us, was bothersome because they couldn't or wouldn't pay attention (nor would their parents insist upon it), and they didn't sit still for any length of time. I'm usually pretty patient with smaller children, but I don't think I managed to be able to pay attention for more than a minute or two of each song without some disruption.
On the other hand, Temple Square was beautifully decorated, and although we didn't walk around much (it was either really cold or we either were trying to get inside to the concert), I loved seeing all the lights: 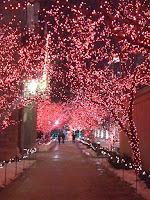 Last December was my first visit to Salt Lake City to visit Ed, who gamely let me get all sappy as I walked around photographing and videotaping the lights. (It was really romantic, in a sappy, girly kind of way). (This is my video from that visit.)
Posted by Michelle Szetela at 11:46 PM