On Monday I came back from my first ever visit to Texas, to which Ed and I had gone to visit (or in my case, be introduced to) his parents. Austin is hot, in a muggy, rather uncomfortable way; fortunately we spent most of the visit in air-conditioned surroundings. The visit went well, I think (I hope); I don't think his parents disliked me, but it'll take time for all of us to get to know each other. There is one rather big aspect to the relationship that makes Ed's mother in particular uncomfortable and which saddens her, and which she'll have to come to grips with, but there's not a lot to be done on my end except go about my business.

The flights were smooth, and from my perspective had an added bonus because I finally got to fly first class, which came with an actual meal that was served on actual plates: 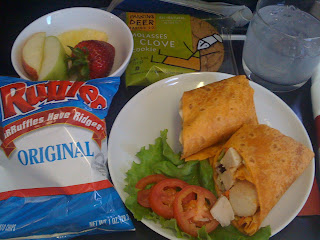 We were worried we wouldn't be able to get seats on the flight back, but things all worked out, and we even got to fly first class again. The flight had been delayed leaving Austin, and by the time we were flying over Salt Lake, any remaining snow and icky weather had cleared up: 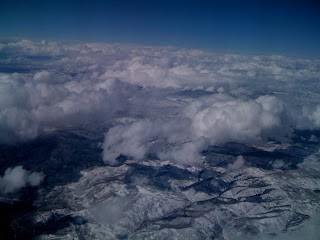 Today was a busy day: We hit Costco, Wal-Mart, and the grocery store. I had been planning to cook dinner, but we spent so much time shopping that we simplified dinner and will cook later this week (tomorrow we're meeting some of Ed's friends for dinner out, and then possibly a movie). At Wal-Mart we acquired some rather nice patio chairs, a small table, and some LED accent lights for the backyard. The yard is beginning to look very suburban - more so - and we felt ridiculously pleased with ourselves. It does look nice out there, and we sat outside for a little while tonight before getting chilled.

Posted by Michelle Szetela at 9:46 PM No comments:

Today being Mother's Day, I thought I'd cook something special for dinner tonight. I'm currently simmering Rogan Josh with a few modifications: At first I couldn't find, then didn't have enough money for, lamb, so I used a beef roast instead (I forget which particular cut; it doesn't matter). In my mad cleaning of our spice cabinet a few weeks ago, I think I may have thrown out the chili powder; in any rate, I couldn't find it, so I used red curry powder instead. I had all the other spices, and I probably could have omitted the chili powder, but what the hell.

Last night I made chocolate buttermilk cake with ganache, although I didn't have enough ganache to frost the sides of the cake. This also doesn't really matter; the cake looks pretty tasty. I'm also making chocolate angel pie. I forgot to add the walnuts to meringue pie shell (doh!) so I toasted some walnuts and will be adding them to the filling.

I made the cake last night and baked the meringue pie shell this morning. As the pie shell has been in the fridge, as the recipe calls for, I've been assembling the Rogan Josh. I don't have the chocolate for the pie filling, so I'll be running out to the store shortly, but with everything else already done there's no rush for making the filling (which has to be in the fridge for at least two hours before being served).

The house smells like an Indian restaurant. It's great!
Posted by Michelle Szetela at 11:11 AM No comments: